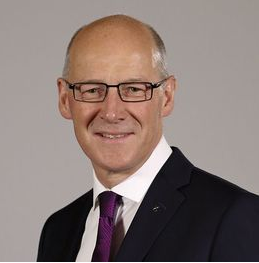 John Ramsay Swinney (born 13 April 1964) is a Scottish politician serving as Deputy First Minister of Scotland since 2014 and Cabinet Secretary for Education and Skills since 2016. A member of the Scottish National Party (SNP), Swinney has also served as the Member of the Scottish Parliament (MSP) for Perthshire North since 2011, having previously represented North Tayside from 1999 to 2011. Swinney served in the British House of Commons as Member of Parliament... Wikipedia